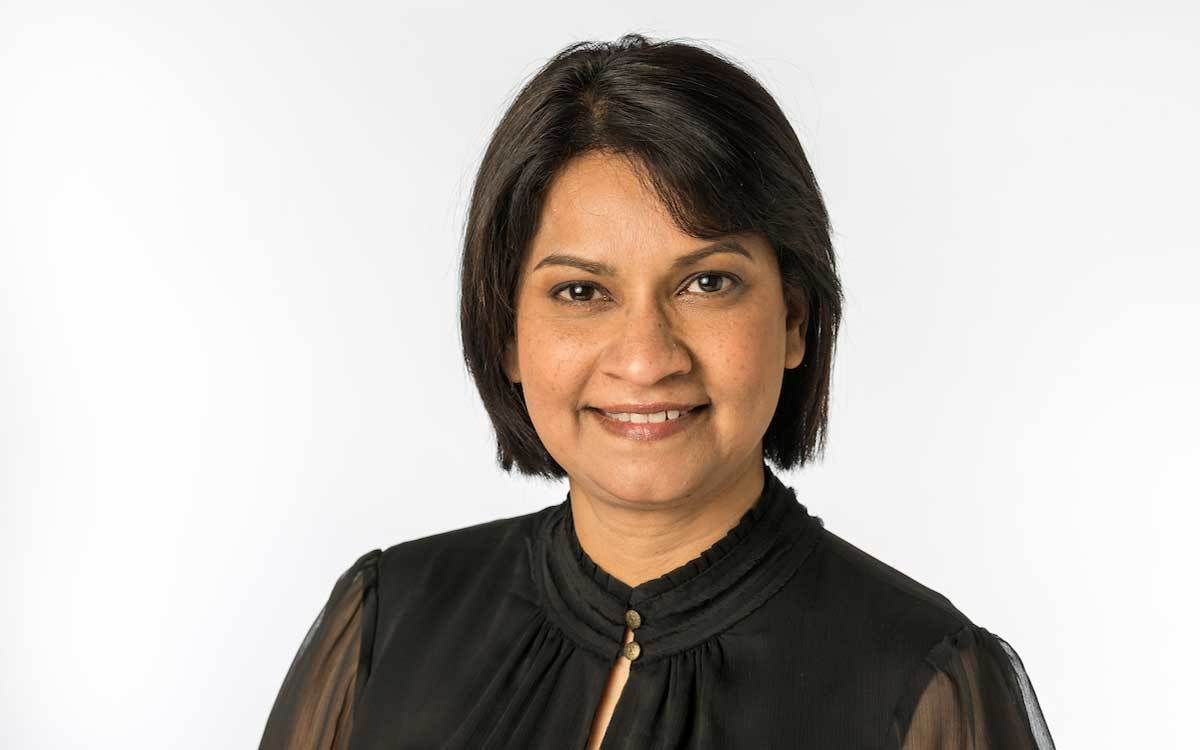 Chair of the Department and Morris Pollard Professor of Biological Sciences

Crislyn D’Souza-Schorey distinctly remembers the day in 2014 when she agreed to become the chair of Notre Dame’s Department of Biological Sciences.

“The dean said to me after I accepted, ‘I think that’s terrific. Our students need more role models,’” D’Souza-Schorey says. Immediately after that conversation, she headed to DeBartolo Hall to teach her pre-medical cell biology course.

And that’s when the weight of her decision began to sink in.

As she walked into the classroom and noted how many female students eagerly awaited her lecture, she realized what then-dean Gregory Crawford meant when he talked about role models.

“It is important for female students to see women faculty transition into leadership roles,” says D’Souza-Schorey, the Morris Pollard Professor of the Department of Biological Sciences as well as the department chair. “I was confident that the dean and my colleagues wanted me to take on the role because of what I’d bring to it, and not just because they wanted to fill the position with the first woman chair.”

Strong mentoring and supportive role models — which include family, professors and peers — led D’Souza-Schorey on a path from that of a curious young girl growing up in Bombay (now Mumbai), India, to a highly respected professor and researcher at the University.

She researches how membrane trafficking impacts cell motility under normal conditions and in disease states, especially cancer. It is important for cell components to be placed at the right place at the right time. She explains, “When this goes awry, the consequences can be detrimental.”

Her lab has identified how this altered regulation can impact early steps in the spread of cancer. As she talks about her work, she shares different videos on her laptop of her current research that show invasive melanoma cells moving in different ways. She points to tiny bubbles that appear to pinch from the cell surface and float away. “These tiny sacs called microvesicles are packets of information packaged and released by the tumor cell,” D’Souza-Schorey says. “They condition the tumor niche to facilitate metastases. We study how and why they are formed in an effort to exploit their properties for clinical purposes.”

This type of foundational research is critical for identifying important therapeutics and diagnostics needed to tackle cancer. This line of D’Souza-Schorey’s research has built upon itself over many years, beginning with her research on the role of one type of binding protein, ARF6, when she was a postdoctoral fellow at Washington University School of Medicine in St. Louis.

In the next 20 years, she hopes her studies will have proven to have major clinical impact. But years ago she couldn’t have guessed the path her research would take.

“A research path evolves and changes, which is the beauty of it … it’s always interesting, and there’s always something new,” she says.

Growing up, D’Souza-Schorey had an interest in biology and organic chemistry, and her parents, neither of whom are scientists, supported her endeavors. Her parents juggled dual careers and taught her the importance of integrity, empathy, education and a strong work ethic.

She completed her studies for a bachelor’s degree in India by age 19, and was working toward her master’s degree when one mentor suggested she pursue a doctoral degree. Another mentor, the female head of her department, told her she should consider studying abroad.

“It was just a ‘what if’ statement in a conversation,” she notes, but the comment shifted D’Souza-Schorey’s outlook. She began outlining all the steps needed to pursue a doctoral degree in the United States. The next few months were a whirlwind, and D’Souza-Schorey soon found herself working toward her doctorate at the University of Texas Health Science Center at San Antonio, with her parents’ blessing.

Though her parents were her first mentors, D’Souza-Schorey says she’s been blessed with others — predoctoral and postdoctoral advisers who were outstanding scientists, as well as department heads at medical schools. Working with them was a unique privilege, she says. She references those experiences as she mentors students in her lab and leads others in her role as chair of the Department of Biological Sciences.

“Science, like it should, transcends gender and race. We must provide our students the very best education in a diverse intellectual community.”

Though she feels fortunate that she hasn’t personally felt stifled by gender bias in her own career, she realizes that being a woman in academia (or any profession) can be fraught with challenges.

“I view myself as a scientist who happens to be a woman,” D’Souza-Schorey says. “However, there was a point where I had just received tenure, was managing multiple projects and having a baby. This meant I was navigating a path specific to women scientists.”

Promoting diversity and inclusive excellence within the department is important to her, she says, because wide-ranging perspectives engender a richer intellectual environment. When female scientists move into leadership roles, this also sets a good example for males — something she thinks about because she and her husband, Jeffrey Schorey, the George B. Craig Jr. Professor in the Department of Biological Sciences, have a 13-year-old son.

That’s why one recruiting and hiring metric she’s focused on is the battle against “implicit bias” — unconscious thoughts that label women, men and people of different cultures and races in stereotypical ways. It pervades society and is an important issue that needs addressing, she says.

But she commends Notre Dame’s progressive culture. “Science, like it should, transcends gender and race,” D’Souza-Schorey says. “We must provide our students the very best education in a diverse intellectual community. It is important that we grow diversity to build excellence in all our endeavors.”