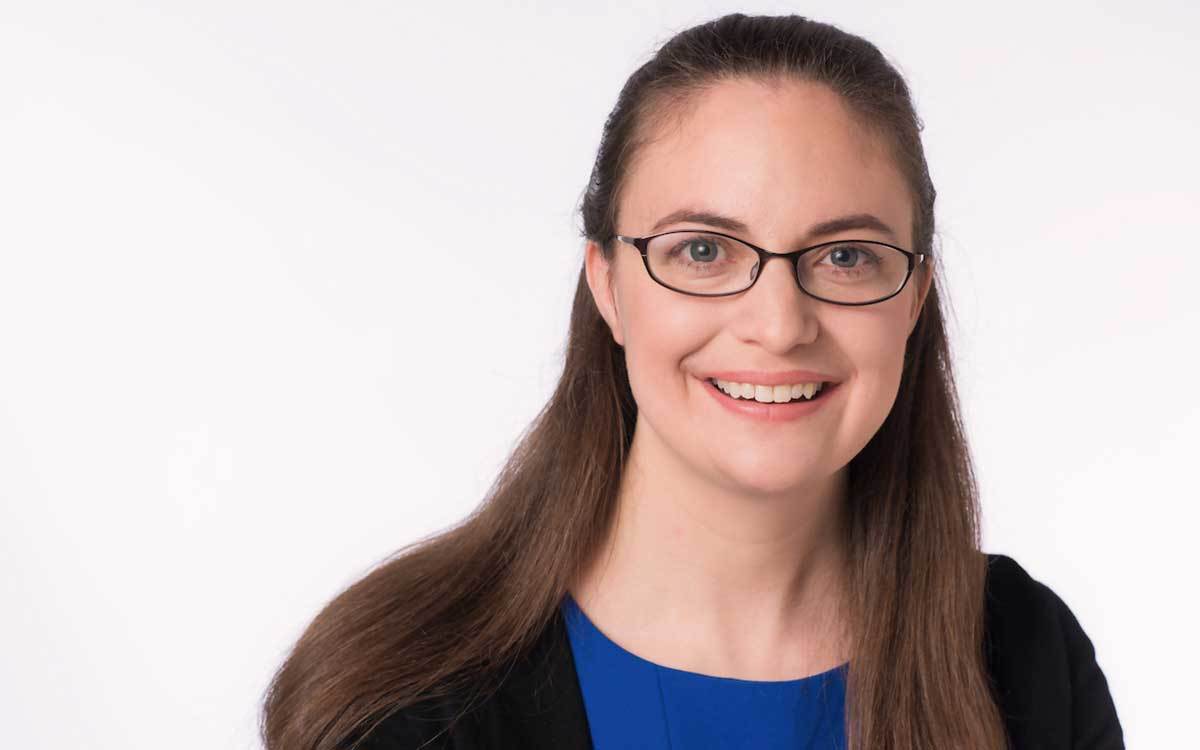 Ashley P. Thrall has long admired bridges as models of both form and function, practical structures engineered to span the shortest distance between two points with equal parts power and grace.

“Bridges are the purest expression of the structural flow of forces in the sense that there is no architect involved in bridge engineering,” Thrall said. “All you see is the raw flow of forces to carry load.”

“Bridges are almost always for public use and funded by public money. They are really only there to serve people, society and to make life better.”

At the same time, she appreciates the societal aspects of bridge design. “Bridges are almost always for public use and funded by public money. They are really only there to serve people, society and to make life better,” said Thrall, the Myron and Rosemary Noble Associate Professor of Structural Engineering and the director of the Kinetic Structures Laboratory at the University of Notre Dame.

That said, Thrall’s path to a career in engineering took several turns along the way.

After graduating from Vassar College with a degree in physics, the Connecticut native worked at CERN, the particle accelerator in Switzerland, followed by performing further CERN research at the University of Michigan before returning to school to study engineering.

Inspired by the book “The Tower and The Bridge” by David Billington, Gordon Y.S. Wu Professor of Engineering Emeritus at Princeton University, she was accepted to Princeton’s civil and environmental engineering graduate program, where she studied under Billington and earned her doctorate degree.

She said of Billington, “He basically taught me an entire undergraduates’ worth of civil engineering just in one-on-one meetings. So he really took me under his wing.”

At Princeton, Thrall learned bridge engineering from Ted Zoli, the national bridge chief engineer of HNTB Corp. A class project on movable bridges under his mentorship turned into her Ph.D. dissertation and ultimately inspired her interest in kinetic structures. Thrall and Zoli currently collaborate on several ongoing research projects at Notre Dame, where his industry knowledge provides practical perspective on academic research.

The daughter of artistically and intellectually minded parents, Thrall chose a career that reflects the influence of family as well.

“My mom’s a sculptor and my dad’s a scientist with a Ph.D. in immunology, so engineering is really in the middle of those two fields in the sense that it’s using a lot of the same fundamental knowledge of science but it’s also very creative,” she said.

Her late grandfather, meanwhile, worked as a mechanical engineer for Pratt & Whitney, an American manufacturer of aircraft engines for civil and military aviation.

“My grandfather is the only other engineer in the family and has been very influential in my life,” Thrall said. “He and both my parents had the idea that you could do anything you wanted to do as long as you worked hard enough to do it. All three of them were very inspirational in the sense that they taught me that you could figure anything out if you just put your mind to it, whether it be art, science or engineering.”

Thrall has been a valuable addition to the Department of Civil & Environmental Engineering & Earth Sciences since her arrival there in 2011.

She founded and directs the Kinetic Structures Laboratory — a state-of-the-art facility within the department that is focused on investigating the behavior of a variety of moving and deploying structures.

Her research enhances the University’s reputation as a top engineering school, one that combines technical inquiry with a creative intuition to develop innovations that improve the health, well-being and quality of life of all people.

Through a National Science Foundation Faculty Early Career Development (CAREER) Program award, she and her graduate students are developing new approaches to rapidly erectable steel bridges. This research aims to develop transformative technologies that can be used for disaster relief, military operations or accelerated construction of permanent infrastructure.

With support from the U.S. Army Natick Soldier Research, Development and Engineering Center, she and a team of graduate students, undergraduate students, postdoctoral research associates, and research staff designed, analyzed and experimentally tested a half-scale prototype of an origami-inspired shelter that is quickly deployable and that conserves energy in heating and cooling. This work included constructing a full-scale prototype and led to two utility patents.

She is also working with the Indiana Department of Transportation to understand the impact of vehicle collisions on the behavior and load carrying capacity of steel girder bridges.

Regarding Notre Dame, she said, “The University and the College of Engineering have provided a tremendously supportive environment. The resources and mentoring — especially from Dean Peter Kilpatrick and my department chair, Joannes Westerink — have created an atmosphere where creativity and rigorous academic research can really flourish. It is a very special place to be.”

Aside from her research, Thrall enjoys the educational aspects of her position. Outside of her teaching and mentoring activities at Notre Dame, she has also developed and implemented BRIDGES (Building Relationships to Inspire and Drive Girls to Pursue Engineering and Science) — a before-school enrichment program aimed toward increasing the participation and retention of women in engineering at Riley High School in South Bend.

“That’s the really fun part of the job, getting to teach the undergraduates and working with the graduate students on their research projects,” she said. “It keeps you young and active. All of these new ideas; it’s a very energetic climate.”

Westerink, Henry J. Massman Chair of the Department of Civil & Environmental Engineering & Earth Sciences, said, “Professor Thrall is emerging as a young leader in the arena of structural engineering. Her historical perspective, her solid theoretical and analytical depth, the range of problems she is solving, her creativity in design and her superb group of students will continue to accelerate her relevance and impact in solving key structural problems of our day.”